THE SCOTT JOPLIN RAGTIME FESTIVAL
​The Chrysanthemum Award, begun in 2019, is presented to someone who possesses a love of classic ragtime music, a deep appreciation of the significance of Sedalia’s ragtime connections, and has demonstrated tireless devotion to the Scott Joplin International Ragtime Festival through their volunteerism.  The list of award winners follows: 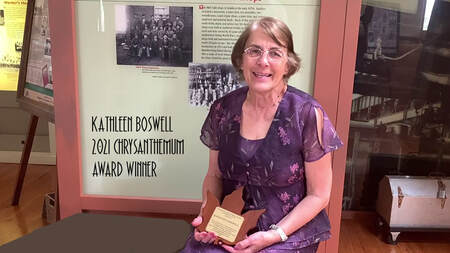 Kathleen has been very active in many facets of the Scott Joplin Ragtime Festival since joining the Foundation Board in 2001.  During the past twenty years, she served as Vice-President from 2002 to 2005 and President from 2015-2018.
Annually, she works very hard to secure Host Housing for performers who have requested to stay in a Sedalia resident’s home during the festival.   She also graciously opens her own home to performers.   She and her husband love to serve the performers a special home cooked meal on Wednesday evening of Festival week…which the performers dearly love.
Since 2012, Kathleen has been the Foundations advocate for our Artist-In-Residence program.   She works diligently to schedule the A-I-R performer at Elementary Schools in Sedalia and Pettis County, as well as Sedalia’s junior high and high schools.  As with the Festival, Kathleen opens her home to the A-I-R performer for the week they are in Sedalia.  She is their chef, chauffeur, and personal assistant that whole week.
Kathleen is also the “producer” of the Vintage Fashion Contest during the Sedalia Festival.  This includes finding the judges, securing the prizes, and hosting the show.
But above all, Kathleen is our most faithful Ambassador for the Scott Joplin Ragtime Foundation and Festival wherever she may be, whether in Sedalia or on her travels in the U.S. and even overseas!!
On behalf of the SJIRF Board, thank you Kathleen for decades of service to the Foundation and Festival.  A video of Kathleen’s acceptance of the award was part of the 2021 Internet Ragtime Festival broadcast on YouTube June 4 & 5.  The video is still available for viewing at this link. Festival Friday June 5, 2021 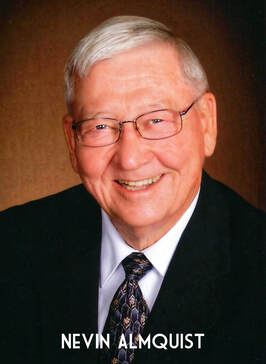 The 2020 winner of the Chrysanthemum Award was presented to the family of Nevin Almquist in conjunction with the 2021 Scott Joplin International Ragtime Festival (SJIRF), which was broadcast via YouTube June 4th and 5th.
Nevin has been very involved in the Scott Joplin Ragtime Festival since the early 1990s.  He became a Board Member of the Ragtime Foundation in 2003 and served until 2014.   He served as President from 2007 to 2009; Vice-President from 2009 to 2011; then again as President from 2011 to 2014.  In 2013, the Foundation was without an Administrative Director.  Nevin spearheaded the daunting task of producing the Festival that year…. which would not have happened without his leadership!
Nevin Almquist was the Festival’s “do-all, be-all with a hammer and saw” fix-anything man.  He was the first board member to awaken every Festival morning starting on Wednesday, set-up day.  He supervised and worked along with the crews to prepare indoor and outdoor venues including tents, stages, tables, chairs, pianos and sound systems.  Once on the scene, he was on the move all day…acting as unofficial plumber, fireman, or diplomat depending on the problem at hand.
He was the last Board Member to head home at night after checking on the Festival venues. Then he, his wife, and daughter would host After Hours until the wee hours of the morning at the Best Western Motel.    Then, he would grab a little sleep then be back at the Festival at the crack of dawn the next day to do it all over again.
In view of his decades of work and devotion to the Festival here in Sedalia, the Scott Joplin International Ragtime Festival is pleased and proud to present the 2020 Chrysanthemum award, posthumously, to Nevin Almquist.   The video presentation of Nevin’s award can be seen at this link: Chrysanthemum Award for Nevin Almquist 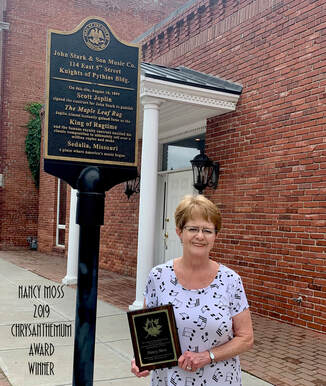 Nancy is one of a handful of people that has attended every SJRF since the first one was held in 1974.  She is a charter member of the SJ Club established in 1991 to support membership, SJR Festival and to continuously promote ragtime.
Nancy has generously made monetary donations yearly to the SJRF since 1991.  She began volunteering in 1993 with the Sedalia Chamber of Commerce SJF hospitality stands, providing festival attendees with answers to their questions plus information and directions to events.
Nancy has served on the SJRF board continuously since 1997.
Nancy started the “Hospitality Room” in 1999, for the performers to provide refreshments between performances.  It was big hit with the performers and has grown to now include snacks, pizzas, fresh fruits, BBQ, sandwiches and other goodies all due to her effort to personally solicit donations every year from sponsors.
Nancy has obtained and planted flowers, watered them, weeded the park and maintained Maple Leaf Park for the SJRF events every year since 2000, In order to produce the 2013 festival, along with a new E.D., Nancy and some other board members stepped up to assume extra duties to produce the festival.
Nancy was appointed Festival Chairperson for 2016.  Working together with Terri Ballard, Deb Biermann, Larry Melton and the SJ Foundation board, produced the 2016 SJRF.  Nancy continues to be proactive in soliciting sponsors for the Performer’s Hospitality Room, promoting the SJR Festival and promoting the significance of Ragtime to Sedalia, MO.  The Cradle of Ragtime.