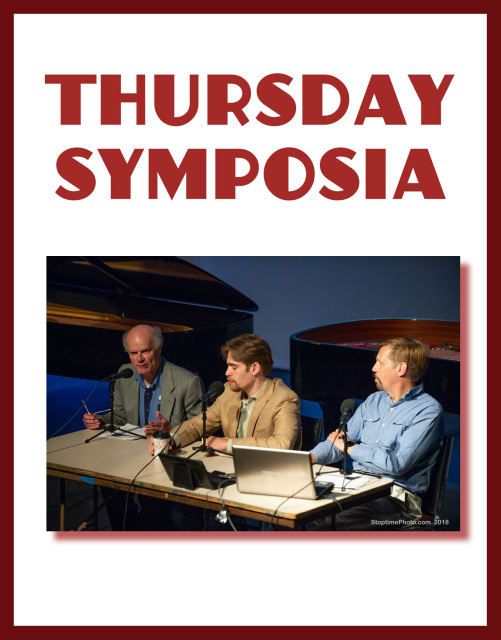 Adam Swanson presents a discussion of his master’s thesis on this one-of-a-kind recording session. Spearheaded by “Ragtime Bob” Darch in 1962, Golden Reunion in Ragtime was unique for many reasons. It was the only time in history that three of the pioneer African-American ragtime composers and pianists had the opportunity to work together in a professional recording studio. The album stars Eubie Blake, Joe Jordan, and Charles Thompson, who had not seen each other in fifty years. They were also interviewed extensively during the reunion. Audience members will get to see rare photographs, hear the music, and hopefully gain a greater appreciation for the preservation efforts of the legendary “Ragtime Bob” Darch.

10:00 AM Bill Edwards - Honky-Tonk Piano and the First Ragtime Revival

Bill Edwards, who was raised on honky-tonk piano music even before classic ragtime was widely available in recorded form, regales fans on the origin of honky-tonk piano in both style and name. Several pivotal examples of recordings are given, and a stunning array of graphics and album covers as well. There will also be a talk on how the "honky-tonk" sound was obtained, and a question as to why anybody would want to obtain it in the first place. There will be information and nuggets possibly not heard in more than half a century, so come ready to be glued to your seats (we will help you up afterwards).

In conjunction with Casey Karp, son of the late author Larry Karp of the Ragtime Kid books, this year's Ragtime Kid recipient (to be announced at the Festival)will give a talk on iconic composer and publisher Theron Bennett and reveal future aspirations he might have for his future in ragtime as well as his hopes for fellow youth. He will be introduced and ably assisted by Dr. Bill McNally, currently administering the program for the Scott Joplin International Ragtime Foundation.