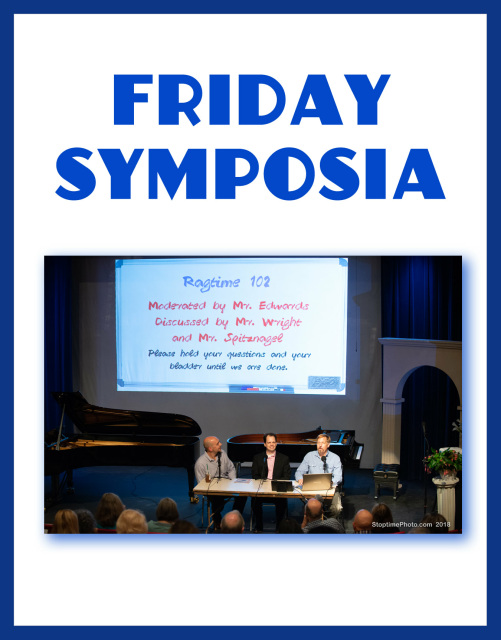 9:00 AM: Virginia Eskin - Stories of Women in Ragtime

Noted performer and scholar Virginia Eskin will wax eloquently on some of the more important figures of ragtime, leaning largely toward lesser-known but important black composers such as Clara Gottschalk, Montague Ring, Florence Price and Mary Lou Williams, responsible for classically-informed syncopated works. She will also perform pieces by their male counterparts as a matter of contrast and comparison. This will prove to be inspiring and entertaining, and a good reason to be in attendance at the 9:00 hour.

10:00 AM: Bill Edwards - Women Composers of the Midwest

Bill will pick some stories from his vast arsenal of carefully-researched figures to highlight some of them - both well-known and quite obscure - that were scattered within a couple hundred miles of Sedalia from the late 1890s into the early 1920s. How could a farm girl not just write but get a catchy little ragtime tune published? Why did some flourish and others quickly wither? How did societal norms of the time play a role in either the success or the disappointment they experienced? Don't worry - Bill isn't asking you for the answers, but he is hoping you will be around to listen to some of them, both inspiring and heartbreaking.

Dr. McNally will be performing a rarity - four transcriptions of pieces by Art Tatum that were actually penned by the composer and performer. He will also have some insight on why these are standouts in terms of separating themselves from countless other transcriptions of works played by Tatum, and having lived inside these pieces, perhaps a bit on what it must have been like to be such a magnificent beast of a performer who did not let his race or poor eyesight limit his options or his fame.